This project is a historical exploration of the great demographic explosion experienced by Mexico City beginning the 1950s and the rapid expansion of the urban metropolitan area.  My research seeks to understand how residents and urban governance negotiated this demographic boom and the subsequent blossoming of colonias populares in the urban periphery during the 1950s-1980s.  The politics involved in the formation and regularization of colonias populares were complex and contradictory, with quickly shifting alliances and periods of significant popular resistance to government policy. In addition, the project explores the economic and social motivations for the massive migration from the Mexican interior to urban centers like Mexico City that contributed to the demographic explosion.

My research delves into the history of one neighborhood whose experience I compare with broader trends in the larger urban area. Santo Domingo is a neighborhood located in Coyoacán, a district in the south of Mexico City.  Santo Domingo was founded (in its urban incarnation) in September of 1971 by way of a land invasion.  The neighborhood is emblematic of the experience in the urban periphery during this time period, and brings to the table questions about the shifting relationship between residents and the government, the role of law enforcement, conflicts with communal and/or ejido landowners, processes of regularization, and models of community-based action.

The project uses the rich archival base available in Mexico City as well as oral histories of Santo Domingo residents.

This component of my project is part of my own evolving understanding of how I can make my academic work support my social justice and organizing work, and vice versa.  I think the history of urban expansion in Mexico City has much to teach communities and organizers in the United States and elsewhere.  I also think that the unique experience and knowledge contained within the communities like Santo Domingo is in danger of being lost forever.  Most residents of Mexico City itself are unaware of the history of Santo Domingo, let alone people from other parts of the country or from other countries entirely. Guiding this project is my belief that working people’s histories, experiences, and knowledge should be made available and shared across country borders and language barriers.  That said, I don’t mean to suggest there are a series of concrete “lessons” that can be extracted from Santo Domingo’s experience and impressed upon other communities or organizers.  Much of what I hope to explore through this project is connected to questions that have no geographical boundaries.  These larger questions hope to reclaim the agency of all people as actors in history and to understand the motivations that drive them to collective action.

During my time at the University of Chicago, I had the pleasure of working closely with a number of organizations in various South Side Chicago neighborhoods.  Organizing on the South Side exposed me to some of the most insightful and committed community groups and leaders that I could hope to meet.  In many of these communities, grassroots organization and collective, community-based action has a deep and at times almost spiritual history.  Their fights are necessarily personal, but the issues at hand are felt beyond the South Side. This is why at the core of my project is a desire to connect the struggles and stories of these communities, from the South Side of Chicago to the south of Mexico City.  While recognizing the diversity of experience and beliefs, the basic goals—the preservation of human dignity and the right to self-determination—are often similar.  The individuals and communities engaged in this work must also be engaged with each other and see themselves as part of a larger project that exists wherever people are active participants in reshaping the structures and norms that govern their lives. 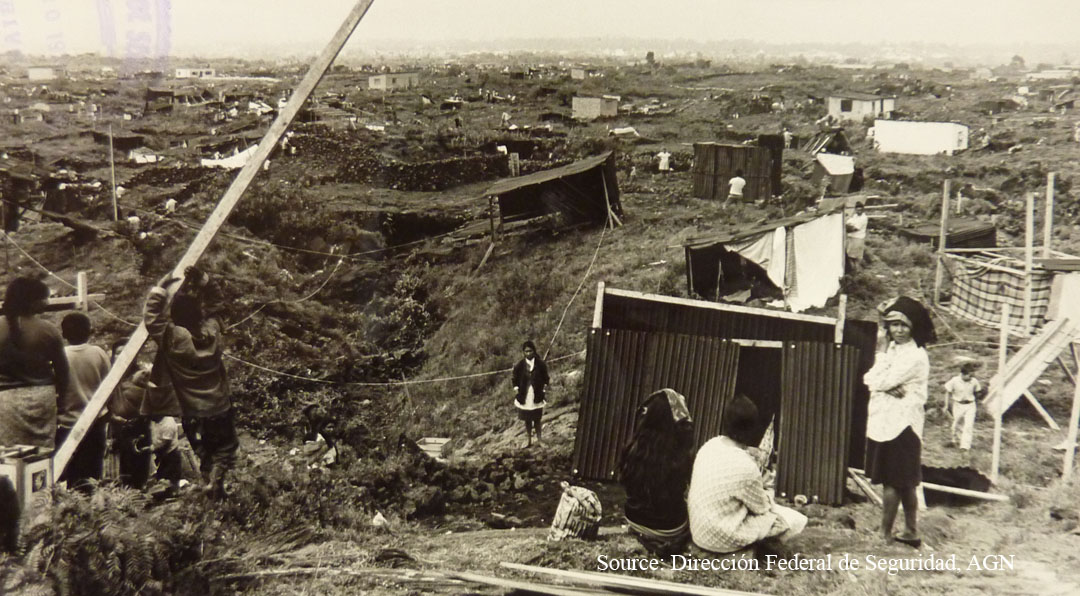 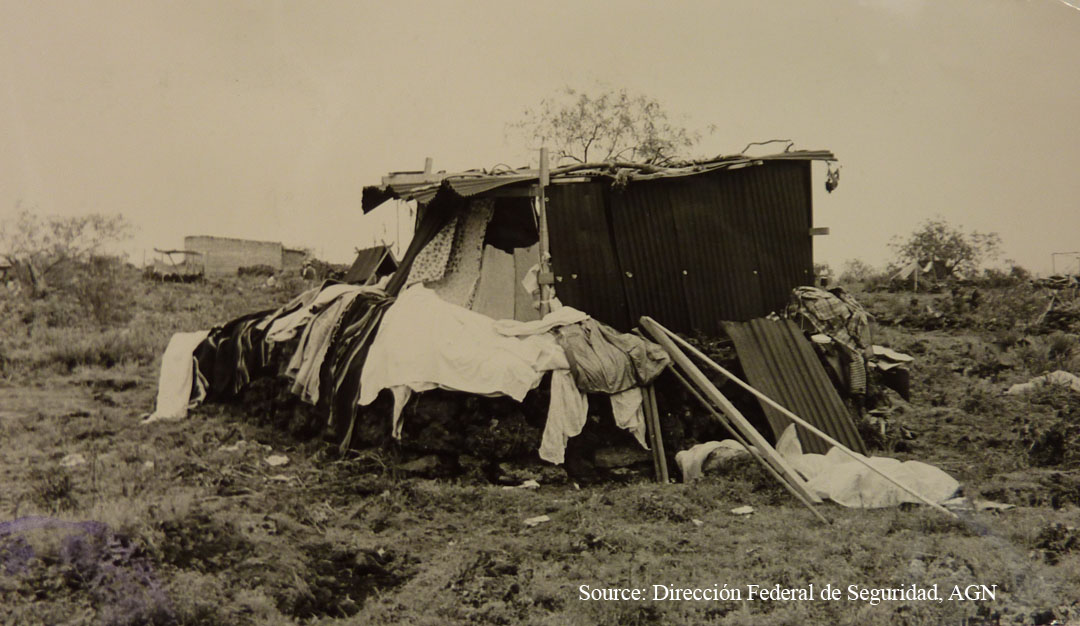 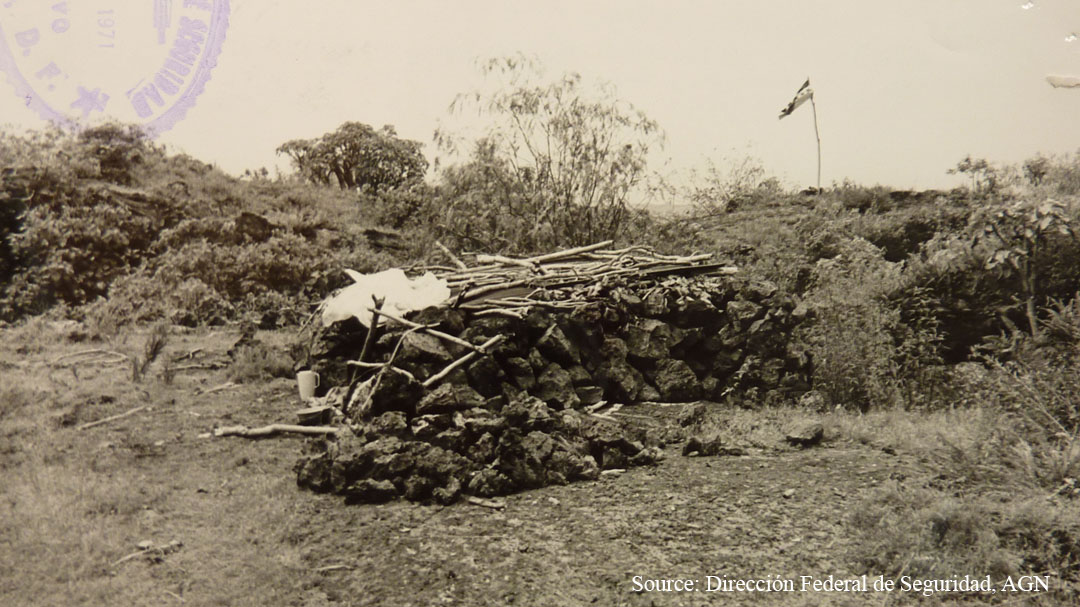 The lava rock of the Pedregal was the most abundant resource available. Many of the houses in the neighborhood to this day are constructed from the pumice stone. Photo: Santo Domingo, 1971. (Dirección Federal de Seguridad, Archivo General de la Nación) 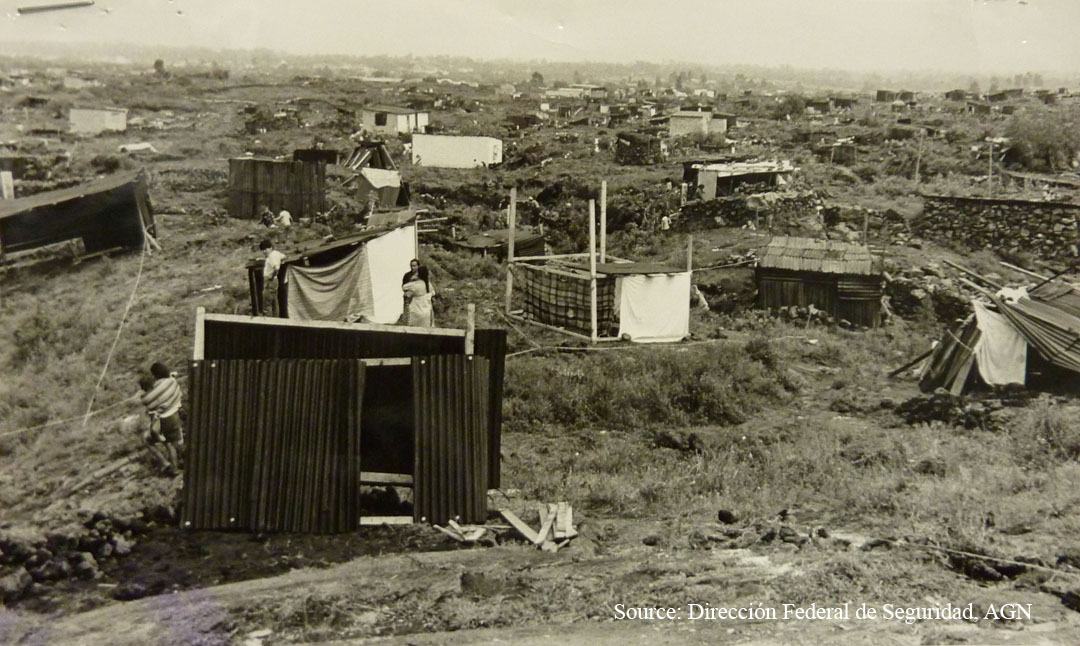 The new residents were referred to as paracaidístas (parachuters) or invasadores (invaders) to distinguish them from the comuneros who were the legally recognized landowners. The comuneros were called such because they held the land in a communal land tenure. They had been legally given the land by President Miguel Aleman in 1948. Santo Domingo, 1971. (Dirección Federal de Seguridad, Archivo General de la Nación)

Families often moved to the new lots from their old housing in stages–a head of family first staking out the plot and erecting the house, and children and extended families following over the next several weeks or months. Santo Domingo, 1971. (Dirección Federal de Seguridad, Archivo General de la Nación) 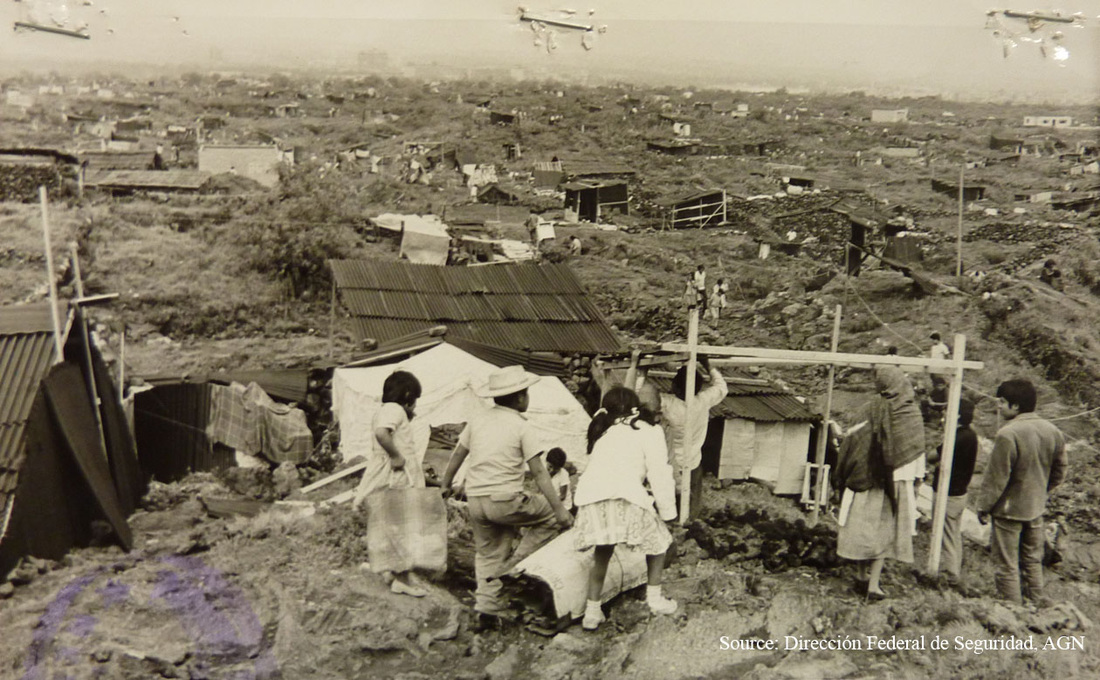 Certain days–often Saturdays–were dedicated to community work projects, similar to the concept of tequio familiar to many of the residents who had migrated to Mexico City from Oaxaca and other rural areas where communal work was part of a resident’s duties to the community. Santo Domingo, 1971. (Dirección Federal de Seguridad, Archivo General de la Nación) 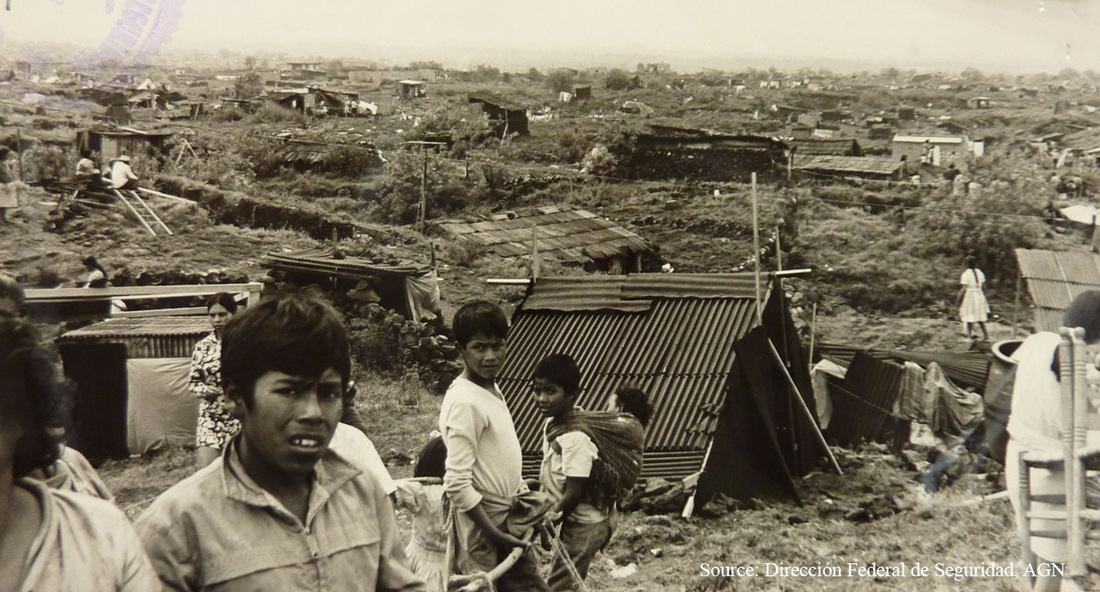 The men of the community were often forced to leave for the day in search of work, leaving the children and women behind to bring water, cook food, build houses, begin road construction, and deal with police. Santo Domingo, 1971. (Dirección Federal de Seguridad, Archivo General de la Nación) 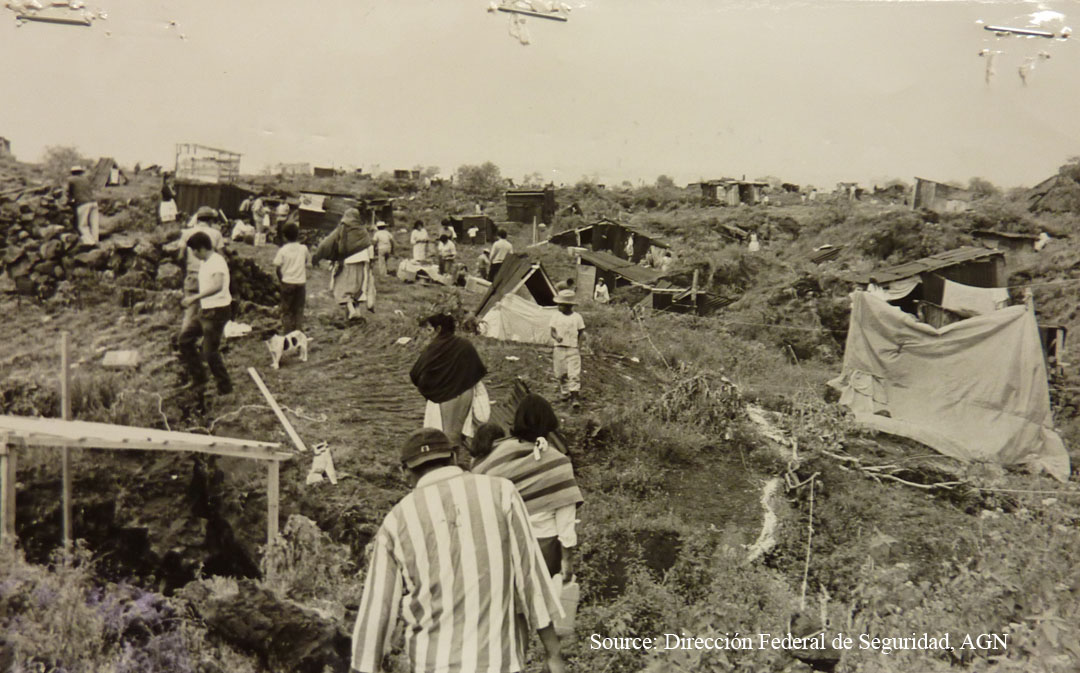 If pumice rock was the most abundant commodity available in Santo Domingo, water was the scarcest and most precious. For years, residents–usually the mothers and children–had to walk for miles to nearby neighborhoods to fill buckets with water for drinking, cooking, cleaning, and bathing. Even after several trips per day, there was always a shortage of water in the early years. Santo Domingo, 1971. (Dirección Federal de Seguridad, Archivo General de la Nación) 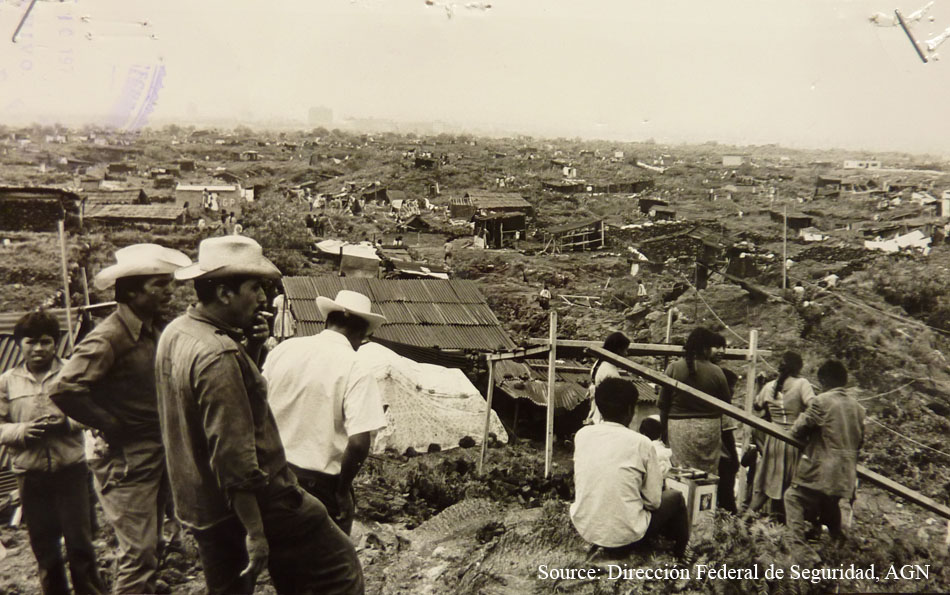 On September 9, 1971, government reports estimate that 6,000 paracaidístas had moved into the Pedregal. But the Pedregal was not entirely uninhabited before the invasion: 1,048 comuneros claimed legal right to the land. By September of 1974–just three years after the invasion–the government estimated that 68,000 people lived in Santo Domingo. Santo Domingo, 1971. (Dirección Federal de Seguridad, Archivo General de la Nación)